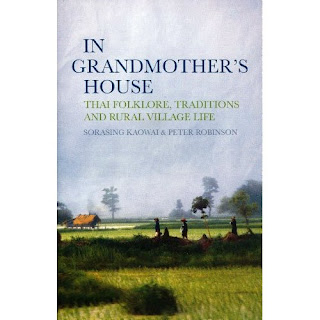 Imagine a life completely outside the realm of the modern consumer society — no shops, no advertisements, no 7-Elevens. The childhood of Sorasing Kaowai, co-author of the memoir In Grandmother’s House, in a remote Thai village reads as something of a utopian dream for those seeking a simpler existence. Central to it all is his grandmother, the village healer and wise old sage who imparts upon her grandson a wealth of traditional knowledge and skills.

Khun Sorasing’s family and fellow villagers are financially poor but not hungry. They grow their own rice and vegetables, hunt and forage in the fields and the forest for all of their food and medicines, make nearly everything used in their daily life from scratch, from baskets to cooking pots to clothing.

The simple life is not easy, however. Long, tedious days in the rice fields, illness, bodies broken and worn out after years spent planting rice. Sorasing himself is orphaned — his father, a layabout and alcoholic, disappears. His mother dies of an unspecified illness when he is a teenager.

The author’s relationships with his grandmother and mother are the most moving and compelling parts of the book. Rural children were largely expected to leave school at a young age to help the family in the rice fields. Khun Sorasing’s mother, however, insisted that he stay in school no matter how difficult, and she went to work in the city to help pay for it. Sadly, she died before she could see her son graduate.

In a wrenching scene, young Sorasing and his uncles go to Samut Sakhon to collect his mother’s remains and are unable to afford to bring her back to their village. “To this day, my uncle apologises to me for the sad way he had to handle my mother’s funeral,” he writes.

Co-authoring is Peter Robinson, author of Phra Farang: An English Monk in Thailand and Good Morning, Buddha, memoirs about his time spent as a monk in a forest monastery in Northeastern Thailand (written under his monk name Phra Peter Pannapadipo). A number of stories about Peter’s experiences and discoveries in Thailand are incorporated into Khun Sorasing’s tales, bringing a broader cultural dimension into the book together with Mr Robinson’s lively conversational style of writing seen in his other works.

Anyone interested in Thai culture and daily life will find many gems in this book. Sorasing describes in vivid detail his grandmother’s healing techniques and rituals to honour the land.

Since Sorasing’s departure from the village in 1993, it has undergone a rapid transformation, much like the rest of Thailand. By penning this book, he captures a way of life that seems sadly in danger of disappearing — where family and community are precious, the earth sacred and bountiful, and one’s life is spent surviving on it and giving back what you can.

In Grandmother’s House is an illuminating time capsule that, delving in, makes one question the value of progress and mourn a bit for what has been lost.

We’re sure his Grandmother would be proud.

(A version of this review first appeared in the Phuket Post.)

Proceeds from the book support the SET Foundation, a charity that helps disadvantaged children stay in school.