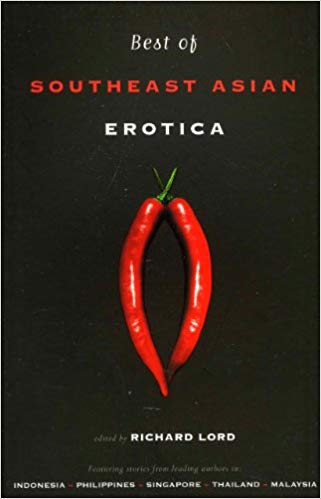 Five of the six stories from Thailand are written from an expat point of view, where the protagonists enter into relationships or situations where all is not what it seems. In themes often seen in works exploring expat-Thai relationships, there are elements of being swept away, becoming intoxicated by exotic beauty and desire, and questions of where the true power lies both in the bedroom and out.

Stephen Leather, probably best known in Thailand for his Bangkok bar-girl thriller, Private Dancer, opens the Thailand section with a wild tale of group sex, ‘Banging Bill’s Wife’. A British stockbroker on a Bangkok sex-capade in between jobs gets drawn in, via Craigslist, to a fantasy encounter devised by an expat husband and his Thai wife — he and the five other expat male participants in a hot night of filming in a Pattaya hotel room wear masks but in a gender-bending twist the sexy wife is discovered to have had the best disguise of all.

‘Less than a Day’ by John Burdett features Fred, a British reporter, who, in the throes of a budding relationship, reluctantly travels on assignment to Thailand to investigate the murder of an expat in Isaan. Perhaps a bit too predictably, within 24 hours he turns into a blubbering, lovesick mess after a night with a Thai bargirl, Lalita, who becomes his interpreter and guide while he rapidly loses the plot. Just before going over the edge, he asks himself, ‘Where was the paranoia on both sides, the mutual contempt between prostitute and client, the guilt, the nausea?’ — a question that quickly becomes lost in the surges of lust and emotional surrenders that follow. Burdett has another story, ‘The Service Provider’, about a freeloading British woman named Penny who finds herself in Thailand with her strange, wealthy computer-geek ‘client’ to help him indulge in his fantasies involving her and a string of Bangkok prostitutes. After some surprising plot twists Penny also finds herself enchanted by a Thai woman and seems likely to stay on.

In the one tale written from a Thai point of view, ‘Good Morning, Bangkok’, by a self-described ‘vanilla’ writer from Singapore writing under the pseudonym Andrew Penney, a powerful Thai man identified only as The General starts his day with a romp in a Bangkok apartment with his Thai-Indian mistress, Savika. She arouses in him a flood of desire tinged with images of Hindu gods, voluptuous apsara dancers and a milk-churning universe, while she plays the rather thinly explored role of submissive, smiling mia noi (little wife).

Rounding out the Thailand entries are ‘Mad for It’ by Erich R. Sysak, about a hapless, aging English teacher who struggles through unrequited love with a woman he meets at Tesco-Lotus in Phuket, and ‘Painin’ by Brenton Rossow, another tale about love and lust gone wrong.

In one of the few stories written from a female perspective, ‘Breaking Glass’, author Dawn Farnham from Singapore explores workplace power dynamics that extend into the bedroom on a weekend executive escape. Two colleagues fighting for the top job at a firm duke it out in an alcohol-fueled late-night tryst. He makes the first move, but she has the last laugh in the surprise ending.

One of the strongest entries is the opening tale from Malaysia, ‘The Sex Thing with the Tempoyak’ by Amir Muhammad, a fun story where a man finds a clever way to reignite the passion in his fairly new yet fizzling marriage with the help of fermented durian and a dusty old book.

Overall, there’s a good deal of sizzle and page-turning plots to enjoy in this anthology though it is perhaps a bit too man-centric, and it’s a real shame that none of the contributions from Thailand came from Thai writers. Some stories took odd turns into the mystical and sentimental that didn’t always work, while parts of some stories, particularly one describing a body-fluid cocktail, were a bit hard to stomach, though one supposes the enjoyment of such passages is a matter of, errr, personal taste.

As a woman reading this anthology, the ‘tingle factor’ was not as high as it could have been, but it was a fun read nonetheless, and it certainly provides a titillating window into the culture, taboos and gender roles of the region.